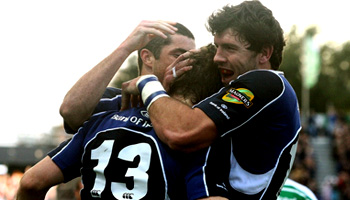 Leinster were as impressive as ever as they thumped London Wasps at the RDS on Saturday, earning themselves a valuable bonus point victory against a struggling outfit that have lost six matches out of eight this season.

Brian ODriscoll, who had a great game last week, limped off with a ill-timed knee injury at half time, but not before he managed to cross the tryline twice as Leinster raced off to a great start.

While it was a commanding display throughout, the pick of the Leinster tries was probably this ODriscoll masterpiece that he managed to create down the right wing.

His first chip and chase was executed perfectly before kicking it again, mid-air, he then re-gathered on the full just before falling over for a fantastic try.

The injury that saw him leave the match at halftime was disappointing, as this week we once again saw glimpses of the O’Driscoll magic of old.

Coach Michael Cheika played down the injury after the match.

“The injury doesn’t look too serious. Brian has taken a knock on his knee, and we made the decision to take him off at half-time.”

Other news has since confirmed that it is actually a knee ligament injury though, and possibly more serious than originally thought. Well update this article with the latest injury status as it happens.