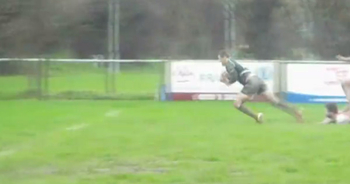 A Brixham rugby player commited the ultimate gaffe in a National League 3 South West match on Saturday. With the line in front of him, he dived to score a great try, got up to celebrate, then was confused when opposition players continued to tackle him.

In poor weather conditions, Brixham rugby club’s Tom McLean thought he had scored what might have been the winning try, but he had actually dived over the five metre line.

Club captain Adam Thomas told the Torquay Herald Express that it was the most bizarre thing he had ever seen on a rugby field.

“We stopped celebrating then and I thought it was going to turn nasty.

“Then, when we saw where the referee was and that play was carrying on, we worked out what happened and got on with the game.

“Tom had the mick ripped out of him on the bus back by his team-mates. It didn’t help that had he run or slid a couple more metres it really would have been a try.

“Barnstaple were 6-0 up at the time and that would have made it 6-5 with a kickable conversion to come, although in those conditions who knows if it would have gone over.

“No one blamed Tom for costing us the game though. He was won loads of games for us in the past with his tries – and I am sure he will win plenty more in future.”

Brixham ended up losing the match 6-0, so a converted try would have put them in front.

On the club’s website profile for the centre, it says he is known as ‘The Gift’, so perhaps that nickname will now take on another meaning.

Another angle, showing the intercept: