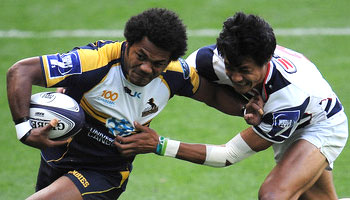 The Brumbies beat Auckland 17-14 to win the inaugural World Club 7’s at Twickenham at the weekend. Today we feature the highlights, as well as some of the best tries scored over an interesting weekend of rugby Sevens.

The tournament featured sides from Russia, England, Australia, New Zealand, the USA, Argentina, and South Africa. While not all could send their strongest squads, some entertaining rugby was played and it was a great opportunity for some youngsters to shine.

The Brumbies had Super Rugby talent in their ranks and proved too strong in a close fought final, after having progressed thanks to a 26-7 semi final victory over Buenos Aires, who finished the tournament in third place.

Henry Speight was the star of the all Southern Hemisphere final, and said the win means a lot.

“It means a whole lot to win this. It’s not only for us but for the whole Brumbies team back in Canberra,” he said. “We’ve been though the whole season together and it’s great to end on a good note and take some silverware home.

Below are highlights of the final, and on page two you can view five of the best tries, including some that featured some incredible passes. Do you like the concept of this tournament?

Above are Five of the Best Tries scored over the course of the weekend, as picked by Premiership Rugby. Look out for some brilliant passes and blistering pace.