Brumbies ready for Bulls challenge after late scare against the Cheetahs 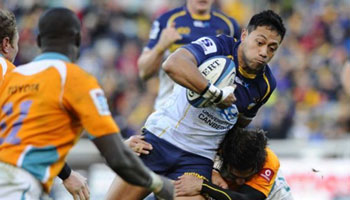 The Brumbies survived a late scare to beat the Cheetahs 15-13 in Canberra in their Super Rugby playoff game at the weekend. They face another big challenge this coming weekend as they take on the Bulls in Pretoria for a place in the final.

The Cheetahs scored two tries but weren’t able to come away with the win after flyhalf Riaan Smit hit the upright from a conversion that would have pushed the game into extra time.

The hosts scored through five penalties from Christian Lealiifano and Nic White, and relieved coach Jake White said he was surprised that his side allowed the visitors to get so close.

“With four minutes left to go we got the scrum and I didn’t see [the Cheetahs] scoring,” White said.

“I thought: ‘That’s it, we’ll just defend and make sure we don’t put numbers into the breakdown. Then they go and score with a minute left. That’s finals footy. We got lucky with that kick at the end,” added White, who will return to his native South Africa for the semi final.

“We’re flying to the other side of the world and playing in a country where rugby is No 1, No 2 and No 3 as their code. They’re a South African side and we know what they’re like. They’ll play with their forwards and use Morné Steyn to add the extras.”

They are aiming to use their homeground advantage to outgun the well drilled visitors.

“We certainly respect the Brumbies as an opponent, but this match will be about us and our ability and drive to make them play the game at our tempo and to our game plan. For that we will need to be accurate and execute the big plays well,” said coach Frans Ludeke.

View highlights of the Brumbies vs Cheetahs qualifier below