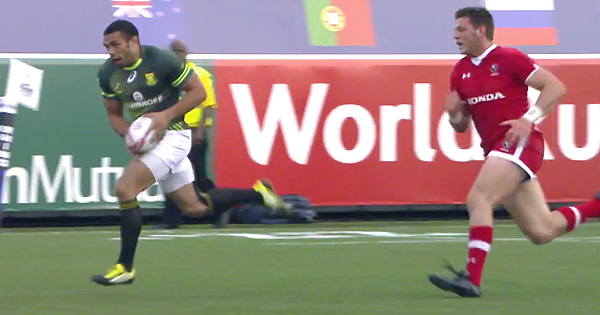 Bryan Habana has won just about everything you can win in rugby, winning a World Cup, Lions series, Super Rugby title, European Rugby title, Currie Cup and probably something else we’re forgetting about, so now he’s after Sevens glory too, specifically a Gold medal at the Olympics.

He returned to the South African 7s team 12 years after first making his debut, and showed all that experience and raw speed to score a try on the opening day of the Las Vegas Sevens.

Day 1 done & dusted. Honoured to be a part of this band of brothers ???????? #TodayIsAGift #Blessed #USA7s pic.twitter.com/CeKdsNr7Fx

Also on show in Vegas are the likes of Sonny Bill Williams and Quade Cooper, so while the UFC’s Conor McGregor might be the main event, these guys are just around the corner and capturing the imagination of rugby fans for different reasons.

For the locals, Perry Baker also scorched the turf, with this sensational breakaway try that was timed at an incredible 11.16 seconds over 100m. Decent.

WHO’S FASTER THAN YOU? 11.16 seconds for an actual length of the field try for @speedstick11! #USA7s @usainbolthttps://t.co/cTyv8t5lIo

After the first day’s play, South Africa, New Zealand, Kenya and Australia have all booked their spots in the quarter-finals. You can watch all the highlights from day one below: