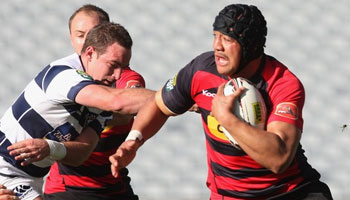 The ITM Cup is ticking along nicely in New Zealand, as a shortened tournament has meant less break between games, and that we’re already into week five. Here’s a quick clip from the first round of action that was requested by a regular.

Canterbury got their campaign off to a good start with a 40-33 win over Auckland at Eden Park. To compound matters for the home side, center Benson Stanley had to exit the field early in the second half after taking this massive knock from hard running number eight Nasi Manu.

Stanley, who over the years has smashed his fair share of bigger players, took the full brunt of Manu’s power as the big guy built up a head of steam and took on the Auckland defense. Stanley suffered a concussion, putting him out of rugby for three to four weeks.

He was knocked out recently too, during the Blues’ match against the Reds in Super Rugby, and has had a history of concussion problems. Similarly to the situation with Berrick Barnes, he will be monitored closely to avoid any serious issues coming into play.

On a not so serious note, the clip below starts with a pretty funny case of the commentators curse, as Tony Johnson totally puts the mockers on goal kicker Tom Taylor. Taylor, son of 1987 World Cup winning Warwick Taylor, was good overall though, kicking 20 points in total.

Another good bit was that referee Chris Pollock realised the seriousness of the knock right away, and also that some of the players come to Stanley’s aid to help out, particularly opposition scrumhalf Willie Heinz, who removed Stanley’s gumguard asap.

If you’ve watched a lot of ITM Cup this season, or you still will, please keep an eye out for great moments of play or any other interesting things that take place. Get in touch, and hopefully we can then share them here on the site for others to enjoy too. Cheers