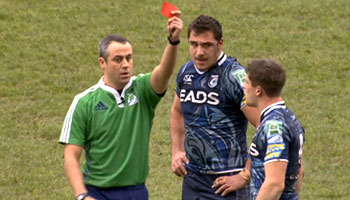 Cardiff Blues scrumhalf Lloyd Williams was shown a straight red card for a dangerous tackle against Montpellier in their Heineken Cup third round clash on Sunday. Montpellier won 35-24 after having a numerical advantage for much of the match.

The 23-year-old Welsh international flung opposite number Benoit Paillaugue to the ground, resulting in a straight red card from referee John Lacey with just a quarter of the game gone.

Montpellier scored three tries while all the home side’s points came through the boot of young Rhys Patchell. The loss of Williams however meant the Blues struggled.

“It was a bit of a rustic challenge, I think we will contest it but we will have to have a look at it. I am not sure it was the right decision,” said Cardiff director of rugby Phil Davies.

Montpellier’s Fabien Galthie had a different view on it though, saying it was the correct decision.

“The law is the law. The player knows the law and he has to respect it. It would have been the same for us. It is a dangerous tackle that deserved a red card,” he said.

Williams will face an ERC Disciplinary Hearing this week to see if he will face a further suspension or not, with the low end entry point for a dangerous tackle being a two week ban.

“That was tough for us, but fortunately no one was hurt and we just carried on after it I suppose,” added Davies, hinting at the possibility of appealing the outcome of the hearing.

“I’ve just got to have another look at it, their guy finished the game which is important, but we’ll just have a little look and see what we’ll do with it after.”

Montpellier host the Blues in France next weekend for the return fixture.