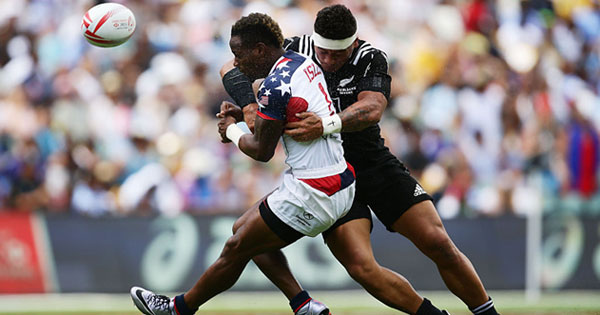 He wasn’t fast enough to get away from that! Pulu smashed him bro!

He might be the quickest rugby player on the planet, but Carlin Isles is not immune from being tackled, and nuggety All Black Augustine Pulu showed us exactly how it can be done at the Sydney Sevens this past weekend.

The Test capped halfback cut off the USA’s attack at the source, crunching the speedster.

As you can see in the video above, Isles was none too pleased after not only being flattened, but clearly getting a few choice words sent his way. It made for an entertaining few minutes, as Pulu gave him a little ‘I got you’ shove on the ground, and Tim Mikkelson scored to add insult to injury.

New Zealand went on to win the tournament, beating hosts Australia in the Cup Final.

USA flyer Isles scored some top tries again at the weekend though, along with his blisteringly fast teammate, Perry Baker. A week ago at the Wellington Sevens in New Zealand he actually scored an even better try. You can watch both in the videos below.