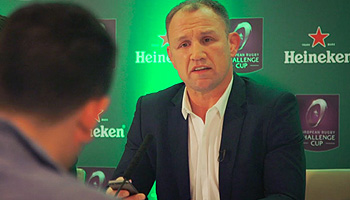 The team at Heineken Ireland put together this elaborate prank to fool a few hardcore rugby fans into attending a fake press conference, and to face an awkward encounter with former Leicester Tigers flanker, Neil Back. It’s all based on 2002’s ‘Hand of Back‘ incident.

Rugby-mad Dubliners Eamonn Dromgoole (25), Phillip McGauran (26) and Cormac Murphy (28) found themselves in a sticky scenario thanks to #RunWithIt, Heineken’s campaign to kick-start the knock-out stages of the European Rugby Champions Cup.

The three fans, amongst hundreds of others, took the opportunity to send Neil a cheeky text, setting in motion a chain of hilarious events that culminated in the ultimate reward. Luckily, Heineken was there to capture the whole thing.

Speaking about his role in the video, and subsequent accidental fame, rugby fan Eamonn Dromgoole remarked; “I texted what I thought was Neil Back’s number for the craic – I thought a bit of banter would be no harm.

“Little did I know what I was getting myself in for. Looking at myself in the video now is hilarious – at the time, I thought I was totally pulling it off.  Fair play to the lads in Heineken, they nailed it”.

The stunt was created by Heineken to unveil #RunWithIt, a campaign that calls on fans to embrace the unpredictability of European rugby to be in with a chance of winning some amazing, money-can’t-buy prizes.

To be in with a chance to win a VIP trip to this season’s Twickenham finale, simply visit  www.facebook.com/heineken and tag your friend who would be most likely to #RunWithIt if they ended up in a tricky spot. Join the conversation @Heineken_ie