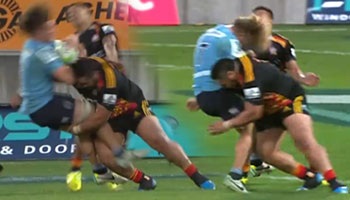 Ben Temeifuna made this cracking tackle in this morning’s Super Rugby round 16 match between the Chiefs and the Waratahs. The ‘Tahs won the game 33-17 in convincing fashion, but earlier in the match Big Ben made his mark with one of the biggest hits of the season.

In recent season’s Tameifuna – weighing in at around 140kg’s – has been known to throw that formidable weight around, either with ball in hand or on defence. In this case he had Michael Hooper served to him on a plate, so he made no mistake in executing what was a crunching tackle.

Tough as nails Hooper took it well though, hanging on to the ball as well as recycling possession. Both players hopped up, and the game continued. Fair play to both of them.