Choke, Growing up All Black and blue 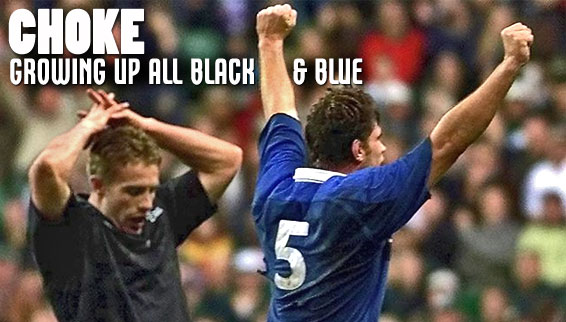 On Sunday New Zealand plays in the quarter finals of the Rugby World Cup, a stage they were famously knocked out at four years ago. Today we’ve got a guest post from a lifelong All Blacks fan whose life has revolved around RWC disappointment.

In 1987 the All Blacks won the world cup, confirming what Kiwis had thought for a long time, that New Zealand had the greatest rugby team on the planet. I was four years old.

At four you’re not really sure what’s going on, you can only really pick up whether the people around you are happy or not. I remember New Zealand winning. I remember my 9 year old brother and his mates doing the Haka in the living room celebrating the great All Black victory, and I remember felling really happy. I can’t remember much else from my fifth year on this planet but I remember that.

In 1991 things went a little astray. I was 8. I remember my older brother worshipping the ground Michael Jones walked on as he scored in the opener against England. I remember recognising the great All black players such as John Kirwan, smoking Joe Stanley, and Sean Fitzpatrick. I even remember being aware of Grizz Wylie. As an 8 year old my head had been filled with so many tales of the brilliance of the All Blacks that I could not even comprehend the boys in black losing.

They lost; I watched knowing that the All Blacks looked like a worse team than the fast and flashy wallabies. David Campese you gave me my first moment of sporting heartbreak, thanks.

In 1995 I was 12. By this time I was a hardened All Blacks fan. I knew all the players and like most Kiwis, I was supremely confident every time they stepped onto a rugby field. I was old enough to understand that South Africa was back on the block and that was a big deal. I remember thinking ‘yeah, they look pretty good but are they a scratch on the ABs?’ Not a chance. We beat them a couple of times in ’94 as well.

And then there was Jonah, this monster of human being that was a myth when he 16, and thrown into the All Blacks to play France as a 19 year old. He was shown a thing or two in that game and looked like a kid, a bloody big kid, playing with men. Boy, but in the ’95 world cup he was the man! We knew he could be a great player but he surpassed all of our expectations. He destroyed the Irish, decimated the Welsh and Scots, and he guaranteed his part in world cup folklore when he trampled on Mike Catt, and the rest of the English team.

There was no way we were going to lose the final to the spirited – but nowhere near as gifted – Springbok team. Have you ever seen Invictus? The ending sucks. A boring game where the All Blacks played like they had been vomiting all night. Extra time came, Stransky knocked over a droppie, let’s all celebrate a unified South Africa… My guts felt like they had literally been ripped out of my arse.

I understand now the political significance of the match and the good it did for a divided nation but for me it was balls. I honestly remember thinking after this heart break there is no way the All Blacks could lose the next one. This is when I believe mine and New Zealand’s absolute obsession with winning the cup really began.

In 1999, I was 16. This is the where the stigma of World Cup All Blacks really begins for me. Before this the All Blacks were just expected without question to win. In 1999 we were not only expecting this team to win, but after ’91 and ’95’s crushing defeats, we were pleadingly desperate for them to win. Tana Umaga got injured in the first game. An over pampered All Blacks team – in many people’s eyes – thought it would a be good idea to put Christian Cullen, one of or maybe the greatest fullback in modern history, into the center. No worries, Hart and Taine have got this under control, and Jonah was in form.

In the infamous semi we all expected to win without question. Jonah was at his brutal best, pulverising a couple of cowardly looking Frenchies on the way to two great tries in the first half. To be honest I remember everything and nothing about that second half, where the team which could only be described as an mystery wrapped in a enigma decided to play out of their skins and put away a clueless and somewhat guttless looking All Black team.

Oh my sweet Jesus not again, this can’t be happening. Not to the French, not in a semi! It wasn’t supposed to end this way! We were in a 3rd place playoff, who gives a rats nostril. We even lost that too… we suck.

In 2003, I was a young man of 20; sixteen years had passed since I could sort of remember the All Blacks winning the world cup. This was it, the All Blacks were chock full of young talent. Rokocoko was electric, McCaw was amazing, and Spencer was at his mercurial best. We had put a ton of points on the Aussies in Australia in a Tri Nations game that year. We were a playing a great brand of attacking rugby and we looked well over a class above the rest.

We managed to beat the Boks in a quarter final in that tournament and then we had the Aussies, who we already taught a lesson to earlier in the year. The ageing Wallabies didn’t stand a chance. Grant Fox said there was no way New Zealand would lose that game, we just had too much fire power.

Oh, how a long Mortlock intercept try under the posts can change the mood of a nation. Piss off, you have got to be shitting me! Where had that team gone who looked as though they could play with feet tied together against the Aussies.

We won the 3rd place playoff over the French… it was about as satisfying as knowing that girl you slept with who gave you herpes doesn’t have crabs.

2007. I was 24 now and had been through a lot with World Cups but the one constant was that we were by far the best team between tournaments. Surely this time, surely with a once in a generation player like Dan Carter, he would steer us to victory. We were all rested and reconditioned; we were like rugby robots that would destroy any opposition in its path. We had humiliated a hyped up Lions outfit, won multiple grand slams, and were once again the Tri Nations champions.

Even after all the previous heart breaks surely this was our time. C’mon black!

The French… France had lost the opening game to Argentina and looked like a team that had me as there technical analyst. As a result they were the 2nd highest qualifiers in their pool and had the misfortune of facing New Zealand in Cardiff, outside of their home country. The morning of that game I was staying at a friends place and his Mrs made us eggs when the game started. While I was eating the egg, McAlister scored a great try and everything was how it should be.

Once I had finished, things went south… I miss that egg.

Wayne Barnes made some calls, DC got injured, captain tackles McCaw had no answers, and that was it. Are you kidding me, in a quarter final against a French team that looked like it had trouble tying their own shoes together only a week before?

My friends place backed onto Remuera rd in Auckland. People were driving and walking by with utter disbelief strewn across their faces. To steal a line from Anchorman, ‘this is getting to be ri-god-damn-diculous!’ Oh this hurts.

It is now 2011. I am 28. Once again our nation is in a state of high tension, and has even higher expectations. So what have we learnt? That supporting the AB’s in World Cups is tough, and rest and rotation as a plan is about as good as taking the queen to a school for people with tourettes.

So this is it, it’s in our country, and once again we have the team to beat and it all feels very familiar, which I find a little unnerving. Now that I’m a bonified adult who’s been out in the big bad world for some time, I’m far more jaded and cynical about a lot of things. I’m not a miserable bastard, I just know that life is a lot more difficult than the 4, 8, 12, 16, 20, and even 24 year old versions of me could understand.

Have I learnt my lesson about the All Blacks and World Cups? Do we Kiwis deserve all this, a lesson in humility for all our years of Rugby arrogance?

I must admit the fear of losing and all the baggage from previous world cups is still with me, and yes we are arrogant about the All Blacks, but they are a pretty amazing team who play a great style of Rugby, and you know what… This is our year, C’MON BLACK!