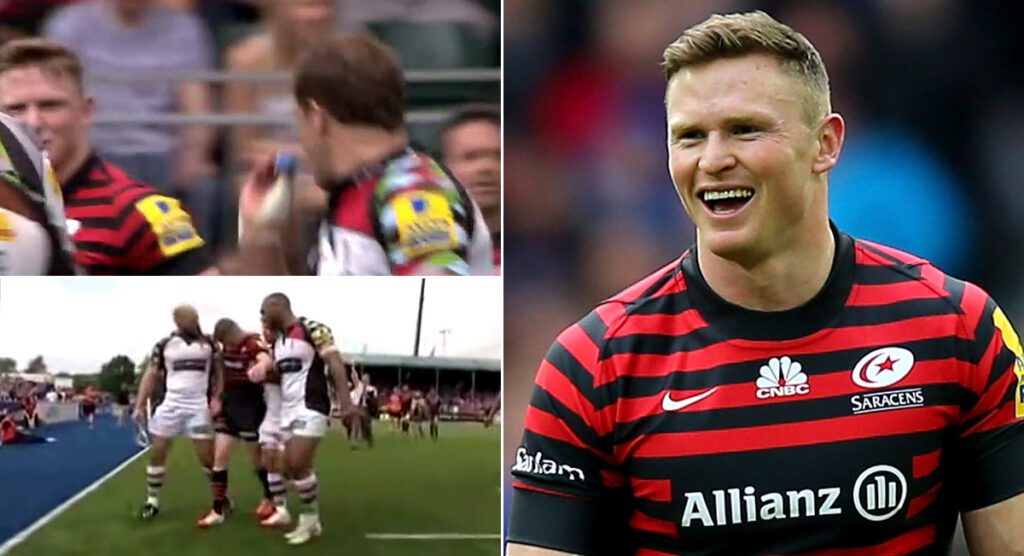 Saracens winger Chris Ashton escaped a misconduct charge earlier this week after he had attempted to put off Harlequins flyhalf Nick Evans during the Premiership Semi Final on Saturday. Ashton shouted ‘push it’ as Evans attemped a conversion kick.

Harlequins fullback Mike Brown scored a try just before halftime and as Evans was about to attempt the conversion, foot about to strike the ball, Ashton shouted at him in an attempt to distract him.

Evans slotted the kick and the players went into the tunnel for halftime, but it caused a bit of a melee and some England teammates took him aside to have a word. Whether it was it was frustration boiling over or just intended as banter, Quins weren’t amused, and neither were the RFU.

They reviewed the incident and released a statement regarding respect being one of the core values of Rugby. The RFU Head of Discipline, Gerard McEvilly, spoke to Ashton about the incident, his responsibilities towards the game and his future conduct. A written warning was set to follow.

Had Evans missed the kick, he would more than likely have had another attempt at it and perhaps if it weren’t halftime, referee Wayne Barnes may have even considered restarting with a penalty on the halfway line. As it was, Ashton appeared to get a telling off by some of the Quins players.

“Humility is up on the walls here and around the stadium, and honesty,” said Harlequins coach Conor O’Shea post match. “It wasn’t part of what you would expect someone to do, but we leave it. They are worthy finalists, worthy winners. Move on.”