Chris Rossouw knocks himself out with this no arms tackle 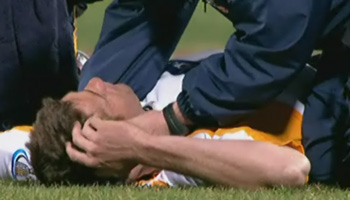 Former Western Province, Stormers, and more recently Toulon flyhalf Chris Rossouw is now at the Cheetahs, plying his trade in the Currie Cup in South Africa.

He’s back in SA now though, and while playing for the defending champions the Cheetahs on the weekend, he somehow managed to knock himself out while attempting this tackle on the Valke’s rising star flyhalf Len Olivier.

Rossouw was actually penalised for the tackle, which can only be described as clumsy. In fact, it looked like he almost tried to run through Olivier, forgetting to get his arms up, resulting in the headclash.

Peculiar technique, and he paid for it, leaving the field and playing no further part in the match. The Cheetahs weren’t effected though, coming out comfortable victors 55-14.