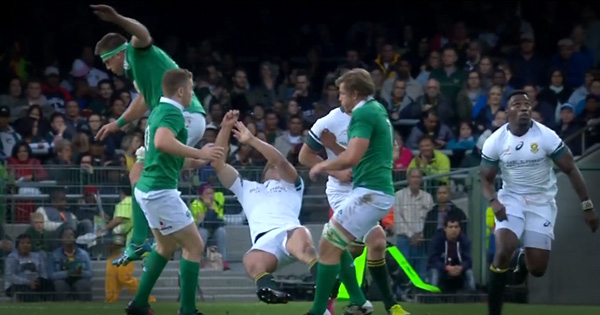 Ireland flanker CJ Stander had to wait anxiously to find out his fate after he was red carded for this challenge on Springbok Pat Lambie during Ireland’s famous win in Cape Town on Saturday. Lambie was knocked out cold and will not be able to take part in the second Test.

*UPDATE: After a lengthy hearing, this article has been updated to reflect the news of the ban

The referee’s decision to red card South African born and raised Stander was met with consternation, but there was more to come, as the discplinary hearing lasted roughly a day in total. It took five hours on Sunday, and when it continued today, it seemed to take just as long (11 total!).

Stander has now been banned for a total of one week. He will miss the 2nd Test of the series at Ellis Park, but be back for the third and final Test in Port Elizabeth in a fortnight.

‘The Judicial Officer was not satisfied on the balance of probability that the referee, Mathieu Raynal of France, was wrong when he issued the red card to the player.’

The full written statement has not been issued yet, leaving Ireland in the dark as to an appeal.

Lambie and Stander were teammates in the South African U20 side at the Junior World Championships in 2010, and reports state that Stander made the effort to check on him in the tunnel, then personally apologise at the post match function.

Lambie will serve a mandatory one week break following the concussion, and with Springbok first choice number ten Handre Pollard also injured, experienced – yet out of favour – Morne Steyn has been called up.

The Springbok’s team doctor said even though the Lambie’s x-rays showed no abnormality, he will however undergo further scans this week as a precaution. He is now at home in Durban.

What do you think of the 1 week ban for CJ Stander?