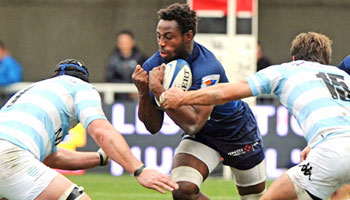 The game of the weekend in the French Top 14 was Montpellier’s 29-14 win over Racing Metro at the Stade Olympique Yves du Manoir on Saturday. Both sides showed attacking intent throughout, which provided a thoroughly entertaining spectacle.

On New Years Eve Montpellier pulled off this valuable win which keeps them in touch for the play-offs. They scored four tries, some of them out of the top drawer, via captain Fulgence Ouedraogo, Lucas Amorosino, Santiago Fernandez, and Sakiusa Matadigo.

Remy Vaquin and Sireli Bobo, who keeps getting better with age, scored a try each for the visitors. Bobo denied Montpellier a bonus point by scoring that late try.

“We would have given our right hand for such a result, even if losing the offensive bonus point in the last minutes is annoying as we gave it away in turning the ball over,” he added.

Montpellier were delighted with the win though, considering the thumping they took from Toulouse previously. Below are extended highlights from the game as there were many quality pieces of play to see. Keep an eye on RD’s Twitter and Facebook for more updates and to place your requests.