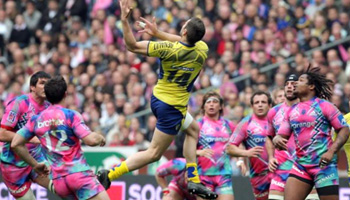 Clermont beat arch rivals Stade Francais 21-19 in the Top 14 in front of an incredible 79 842 spectators, a record for a regular season French championship game.

It was a thrilling match that ultimately came down to a battle of the kickers, with Brock James and Lionel Beauxis exchanging kicks. James came out on top though, slotting the vital penalty that came after a big tackle on Aurelien Rougerie only a few minutes from time.

Beauxis had an opportunity to kick a winning penalty with time up, but missed.

The two hits from the game that were featuring are as much different as they are spectacular. The first is a sensational covering tackle from Argentinean Juan Manuel Leguizamon on the powerful runner and try scoring machine, Napolioni Nalaga.

While at first glance it might have looked like a regulation tackle, further replays will show what a solid hit it was, taking out the big mans legs and preventing the try that he would normally so easily score from that position.

The second hit in this clip is that of the more disgraceful type, with Stade center Brian Liebenberg putting in this big shoulder on Rougerie.

A shoulder check, late in the game, Liebenberg was shown yellow and handed Clermont victory by giving away the penalty, which James duly converted.