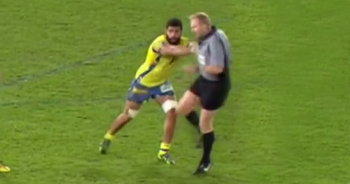 Clermont flanker Viktor Kolelishvili can count himself lucky after receiving just a warning for pushing referee Wayne Barnes in last night’s 21-13 Champions Cup loss to the Ospreys. The Georgian shoved Barnes out of the way and was only spoken to and penalised.

Barnes handled it well, albeit leniently, managing to remain calm and refrain from carding the player. Some have felt the flanker’s actions required a far sterner punishment though, so there is a chance that he will have to face up to a disciplinary hearing in the not too distant future.

Abrasive flanker Kolelishvili was sent off for his part in a massive brawl between Georgia and Canada in 2013 however. On that occasion he high tackled a player then threw some punches.

There have been other incidents involved referees over the years though. In 2008 Munster centre Lifeimi Mafi casually pushed a referee who was in his way, while in 2009 Brian Mujati got himself in a bit of trouble for pushing referee Nigel Owens.

In 2013 Barnes red carded Northampton Saints’ Dylan Hartley after the hooker swore at the referee during the Aviva Premiership final. Hartley was banned for 11 weeks, with the incident costing him a place on the British and Irish Lions tour of Australia.

Kolelishvili’s shove was clearly a moment off ill judgement, but at the same time players simply cannot place their hands on the referees at any stage of a match. When reviewing the incident, the officials will more than likely not take the same calm approach that Barnes did.