Comeback kid Brad Thorn discusses coming out of retirement at 41 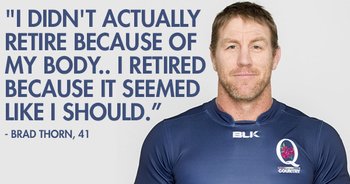 As you may have heard by now, cross-code star and World-Cup winning All Black forward Brad Thorn, 41-year-old, has decided to come out of retirement for Queensland Country in Australia’s National Rugby Championship.

In this video, Thorn explains that his role in the Reds organization will be that of player/coach as he has been named in the player squad for Queensland Country.

As someone who has played so much rugby over the years, the game is clearly an integral part of Thorn’s life, with the love of the sport driving him forward.

Country coach Toutai Kefu admits: “He genuinely just loves to play football, and that’s why we all got into rugby in the first place.

“If he wants to play, I don’t see why not. He keeps himself really fit. He trains every day. I’m a bit embarrassed walking around beside him because we’re the same age.”

Thorn’s experience will be heavily relied upon as well when it comes to the advancement of future second rowers. He also admits in the video to being close to taking a roll in the Reds Super Rugby campaign, before deciding against it.

“I didn’t actually retire because of my body,” Thorn said. “I retired because it seemed like I should – I turned 40. If you had of put the number 32 next to my name I would have signed another two-year contract.”

It remains to be seen exactly how big a role he will play on the field and even he admits he doesn’t know how long it will last. However, if this video is any indicator, Queensland Country is definitely happy to have such quality experience on board.