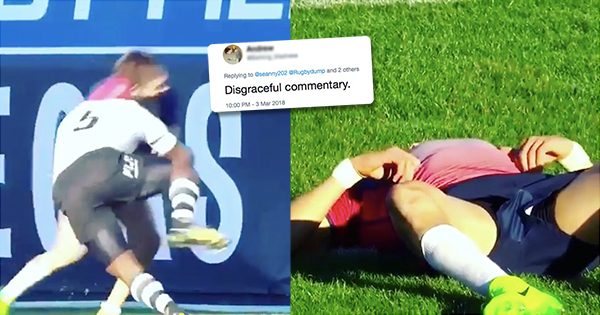 Fiji and Russia met at the Las Vegas Sevens, with Fiji easy 38-0 winners. This tackle right in the closing minutes caused a bit of commotion, as Sean Maloney and co-commentators made a lot of noise about it. Some though, were not as impressed.

Fiji’s Vasikali Mudu made the thumping smother-shot on Ilya Babaev, which at first looked good, with physicality being an aspect of rugby that we all enjoy. As replays showed though, Mudu’s head appeared to make contact with Babaev’s chin, contributing to the devastating blow.

“Can’t remember a bigger shot. This is next level,” tweeted Maloney.

After we retweeted it on twitter, there were a number of complaints, mainly saying that the commentators (and perhaps, us too) were glorifying illegal tackles.

There was a bit of a backlash, with one user saying “Disgraceful commentary” while another said “Commentator clearly not in the real world.” Then another: “It’s head to chin. Why the living hell are you glorifying taking someone out with a head to the chin?”

Clearly Mudu’s head did make contact with the chin, but with arms attemping to grasp and shoulders hitting below the neckline, was it an illegal tackle or simply an unfortunate outcome?

Let us know what you think, as opinions on this one vary.