Compilation of the Top Tries in Super Rugby in 2013 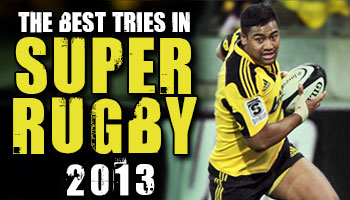 The much anticipated start of Super Rugby 2014 is this weekend, so to give you a taste of the kind of rugby we’ll be treated to, here is a compilation of some of the best tries scored in last year’s tournament. It’s not a short video, but it’s well worth watching.

This weekend the tournament starts, albeit in a low key manner as there are only two matches, between the Cheetahs and Lions, and the Sharks and the Bulls. In round two there is a full serving of games though, with seven matches across South Africa, New Zealand and Australia.

Last year was another amazing season for Super Rugby, and the video below features no less than 44 absolutely top quality tries. They bring back great memories, and it’s quite hard to believe that they all took place in just one season.

Another notable mention would be Pat Lambie’s try, which was featured in the recent post we made with the nominations for the South African Try of the Year Award. That will be announced tonight.

SUPERBRU: Join our SuperBru Pool to make your picks each week

Credit to TheJml217 for a great video