Compilation of the unpunished Teboho Mohoje high tackles against Argentina 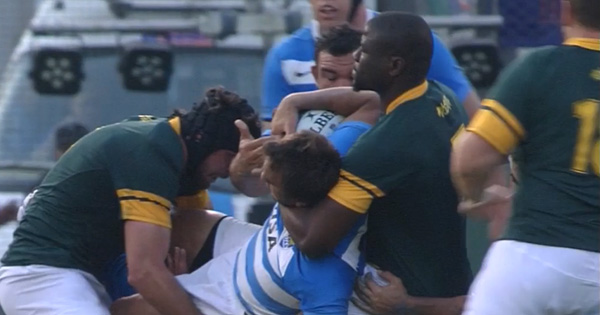 Springbok flanker Teboho ‘Oupa’ Mahoje made a number of high tackles against Argentina in Salta but suffered no consequences on the day. He has since been issued a warning, which frustrated fans as they felt he deserved to at least be penalised on more than one occasion.

The warning came after he was found to have contravened Law 10.4(e) Dangerous tackling around an opponents neck, for a tackle that he made in the 49th minute of the match (the headlock, as seen in the video below).

Argentina fans at the ground and online were extremely unhappy with what went on, especially considering that Mohoje’s tackling technique led to him clashing heads with star player Juan Martin Hernandez, who had to leave the field late in the game.

If you missed the game or haven’t seen it yet, this compilation shows all of the tackles, including two from the first Test in South Africa.

Argentina won in Salta, edging the contest 26-24 for a first ever win at home vs the Springboks.