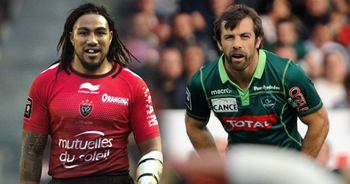 Conrad Smith left Ma’a Nonu clutching for air as the two World Cup winning All Black midfielders faced off against one another for the first time since the 2015 Rugby World Cup final. Both now playing for French clubs, Nonu came away with the 21-17 Toulon victory, but it was Pau’s Smith who took the bragging rights.

Toulon suffered a defeat at the hands of Toulouse last weekend so this was a much needed win, and it came about thanks to two tries from former Reds and Wallabies star, James O’Connor.

The matchup between Smith and Nonu was one that had the fans paying close attention, and following Nonu’s loose intercept pass that he gifted Gael Fickou, the last thing he would have wanted is to be shown up by his former teammate for both the Hurricanes and New Zealand.

While Toulon were in complete control at the time, Smith got the ball and went on one of his mazy runs, carrying with both hands, before throwing a dummy that Nonu will be kicking himself for buying. He then fended a tackler before showing the ball again for another former All Black, Tom Taylor, then dived over for his first Top 14 try.

O’Connor however was the star of the day, playing right wing and crossing for two tries as Toulon moved into fourth place on the Top 14 table, while Pau sit in 11th spot.

The All Blacks themselves have been the envy of codes and teams across the globe for decades, many of whom have sought to emulate aspects of how that environment operates.

Joseph Manu has turned down a rumoured move to New Zealand Rugby and the All Blacks by inking a new NRL deal with the Sydney Roosters.

An outspoken British rugby writer has taken aim at Ian Foster, predicting a dire future for the Kiwi coach if he fails to change his side's fortunes next year.

Inaugural inductees into the RugbyPass Hall of Fame revealed

The first wave of inductees into the RugbyPass Hall of Fame have been revealed as the finest loosehead props ever to grace the game were recognised on Monday.