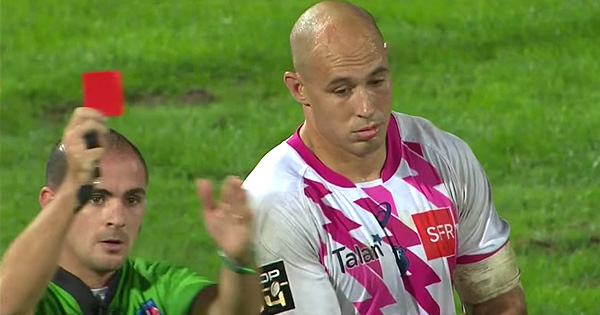 Sergio Parisse will be out of rugby up until at least the 12 October, when he will appear before a LNR Disciplinary Committee to defend the red card that he received for a dangerous tackle against Toulouse this past weekend. The sending off was met with dismay in many corners.

Parisse stopped big opposite number Gilian Galan then lifted him by the shorts, while another player tackled the Toulouse number eight to the ground. The result was that his head/neck made contact with the floor, and the referee felt that a red card was the correct sanction.

Until a decision is reached on the 12 October, Italy stalwart Parisse will be suspended and will miss out on matches against La Rochelle and Racing 92.

Providing there is no further suspension, he should be okay to skipper Italy in November Tests.

While Parisse is generally not known as a dirty player, his disciplinary record certainly has some blemishes. In 2009 he was banned for 8 weeks for eye-gouging when playing for Italy, and in 2013 was red carded and banned for 40 days for insulting a referee.

Last year he was involved in another controversial challenge when he was deemed to have illegally taken Brice Dulin out in the air, and received a straight red card.

A red card for this tackle seemed a little unnecessary though. Let us know what you think?