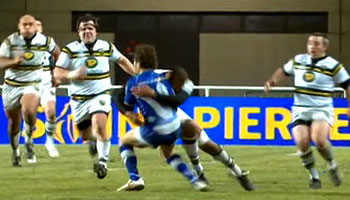 Northampton Saints survived a second half comeback from Montpellier in the European Challenge Cup on Thursday to win the encounter 28-24.

Ben Foden, recently called up to the England squad, was once again a star player on the night as he set up tries for Chris Mayor and Stephen Myler.

It was a close match but Saints sealed the win late in the game with an impressively taken try by Scotland winger Sean Lamont.

There were a few big tackles and tension throughout, but it was this hit from young Courtney Lawes on Montpelliers scrumhalf Julien Tomas that weve chosen to feature.

The young man is as athletic as you could ask for in a guy whos 6ft7 and weights over 100kgs. Anyone whos seen him play will know that he gets around the park, and can easily play as a loosie, not just as lock.

He has a bright future ahead of him and its great to see a big guy show such commitment so late in a game. The chase and hit was timed perfectly, and as you can see, it was a bit of a mismatch as Tomas clearly felt it.