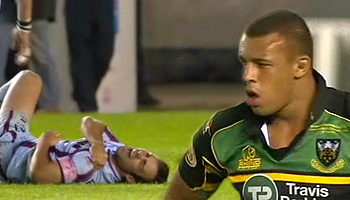 Northampton Saints finished off a successful season back in top flight rugby as they beat Bourgoin 15-3 in the European Challenge Cup final on Friday. Saints have now qualified for next seasons Heineken Cup, knocking out Wasps in the process.

No tries were scored in the ill-tempered match which had two yellows and a red handed out. Steven Myler kicked 5 penalties for the home side, keeping them in control of the game throughout.

French scrumhalf Morgan Parra was unfortunately injured in this crunching tackle from young Northampton lock Courtney Lawes. The Bourgoin players were clearly incensed at Lawes’ being viewed as not being worthy of even a talking to from the referee. Two minutes later they took it out on Lawes, which led to the red card for punching.

Bourgoin coach Eric Catinot later suggested that the referee was a bit lost, and complained that Lawes had been just as deserving of a red card.

Dimitri Yachvili has since been called up to the French squad to replace the injured Parra, who was set to tour New Zealand and Australia in June. Yachvili will compete for a starting place with Leicester number nine and former Biarritz team-mate Julien Dupuy.

Your verdict: Was this a late tackle, or was he committed?