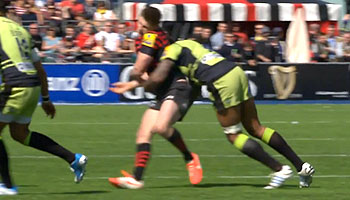 Courtney Lawes made another of his trademark crash tackles at the weekend, this time on England team mate, Owen Farrell. The Saracens flyhalf didn’t return from the tunnel at halftime but has since been cleared as not having a foot injury, and will resume training this week.

Lawes flew out the line and smashed Farrell just as he passed the ball, resulting in a tough landing on the artificial pitch of Allianz Park for the smaller, but tough as nails flyhalf.

This is from the same match as the Marcelo Bosch big penalty kick (and Kelly Brown try), and it was Brown himself that was on the wrong end of another big tackle, that time by Samu Manoa. You can view that on page two, and see more big Lawes (and Manoa!) hits in the Related Posts below.