Crusaders look ahead to another Semi Final after crushing the Reds 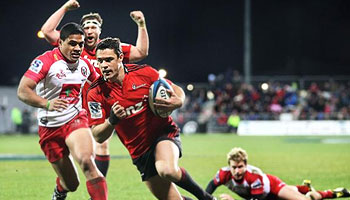 The Crusaders finished the Super Rugby regular season on a high with a dominant 38-9 victory over the Reds, sealing their place in the semi finals, where they will face the Chiefs. It is their 12th straight semi final appearance, aiming for their 8th title.

In what was effectively a quarter final, the Crusaders vs the Reds was set to be an classic contest but it was the home side that played all the rugby and outmuscled the would be challengers, scoring four tries to nil mainly due to their urgency and physical dominance.

They put huge pressure on the Reds up front, which ultimately cancelled out the attacking threats of Will Genia and Quade Cooper. On a sour note, the latter, who hasn’t been a popular man in New Zealand since the 2011 Rugby World Cup, was booed each time he touched the ball.

Richie McCaw made his comeback, a 15 minute cameo, but the forward effort was led by outstanding performances from Sam and George Whitelock, Wyatt Crockett and Kieran Read.

“We’ve got to pat the big boys up front on the back tonight for the effort they put in,” said Carter, who along with Ryan Crotty, Tom Marshall and Israel Dagg, had the platform to run riot.

“They really dominated the Reds forward pack and made it a pretty joyful game for myself and the backline. I’ve been a part of a lot of successful Crusaders sides, but the last four years we’ve come close and haven’t been able to get over the line. It’s really motivating us this year.

“We want to be there at the end, we’ve given ourselves a chance now to play another week and that’s all we’ll be focusing on,” added Carter.

It will be an all New Zealand semi final in Hamilton as the Chiefs host the Crusaders on Saturday.