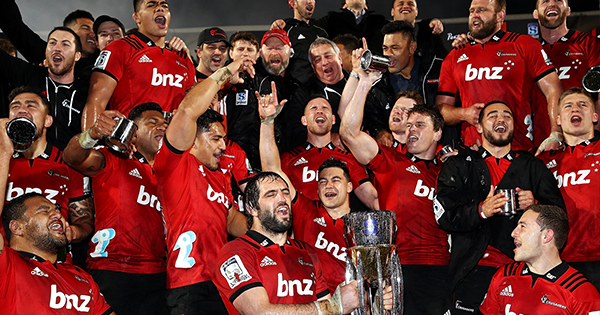 The Crusaders have beaten the Lions 37-18 in Christchurch to win their ninth Super Rugby title, going back-to-back after having also beaten the Lions in last year’s final. Number ten Richie Mo’unga was in outstanding form, picking up Man of the Match.

Despite having just 30% possession and 25% territory in the first half, the Crusaders still led 20-6 at the break. That deficit, despite the Lions putting in a good effort, was always going to be too touch to track down.

“Thanks to the Lions. They were absolutely outstanding and set the pace all year. Three years in finals is well deserved,” said Crusaders captain Sam Whitelock. “It’s pretty awesome to win the trophy back-to-back and the capacity crowd was absolutely superb tonight.”

Elton Jantjies misfired while Mo’unga steered the ship for the home team, picking up 17 points.

Lions captain Warren Whiteley said. “A bit gutted, but I’m just proud of every individual who gave it everything out there.

“Credit to Sam and his team. They were unbelievable. Everything we threw at them, they stopped. We tried everything, threw the kitchen sink at them and they deserve this win.”

It was the Crusaders’ first home final in a decade, which certainly aided their performance but the class shone through regardless, as the Lions – losing in their third consecutive final – never really came close to threatening yet another Crusaders title.