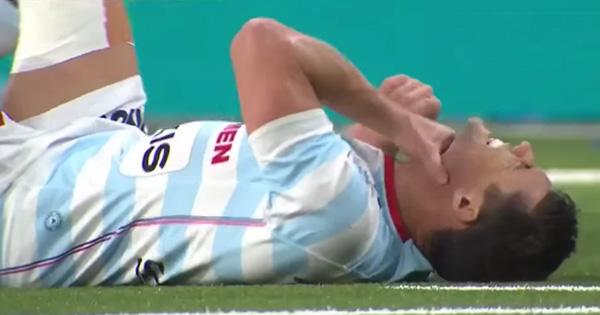 Dan Carter was on the receiving end of a nasty forearm shot to the throat from Stade Francais prop Zurabi Zhvania this past weekend. Accordingly, the Georgian international spent some time in the bin after he was shown a yellow card.

Carter was able to recover and finish out the first half before being subbed for Pat Lambie shortly after the break. The decision paid off as Lambie made three conversions off the back of a Marc Andreu try and a brace from Teddy Thomas.

In what will be Carter’s final French derby with the cross-town rivals, Racing were able to complete the come-from-behind win 28-22 after trailing 14-7 at the half. They currently occupy second behind Montpellier in the Top 14 table.

Of course, the big news for Carter is his upcoming move to Japan when his contract with Racing runs out later this year. Although now 35, he still appears to have a desire to play at a high level of competition.

Japan will host the 2019 Rugby World Cup, followed by the 2020 Summer Olympics. No doubt he’ll see this as an opportunity to help grow the game in the region, but it’s also a decision that will certainly benefit him financially and bring him much closer to home.

“When I was trying to make a decision of whether to stay in France or look elsewhere… it was a tough decision, but it made so much more sense to be living and playing in Japan.”

This nasty (unlucky?) fend to the throat is nothing we haven’t seen before. In 2007 former England hooker Phil Greening was ordered to pay out almost £30,000 for an injury he caused French international Aurelien Rougerie five years earlier.

In what was an unprecidented case at the time, the court ruled in Rougerie’s favour after he had to have three operations to repair his windpipe after the injury, which he felt was due to illegal play after Greening had fended him off in a preseason friendly.

Thankfully, Carter’s injury or pain from the fend appeared to only be temporary.