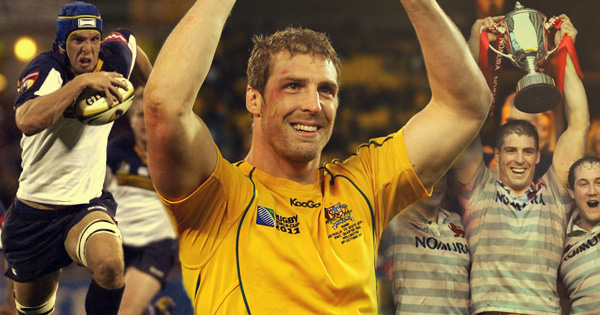 The rugby world is still in shock following the passing of former Wallaby Dan Vickerman. He passed away at just 37-year-old, leaving behind a wife and two young children. The devastating news comes a week after the tragic death of former All Black Sione Lauaki.

Born and raised in South Africa, Vickerman came to prominence at Bishops in Cape Town and later played for the Junior Springboks before moving to Australia to take up a career with the Brumbies in Canberra.

Under 21 rugby with Australia soon followed and later the 204cm, 119 kg second rower made his debut for the Wallabies, turning out against France in Sydney in 2002.

In 2007 he moved to England to study at Cambridge University, which included two Varsity matches, as well as a short stint at Northampton Saints.

His career went on to span a decade, including 63 Tests and two Rugby World Cups. His final Test appearance was in the 2011 RWC semi final against New Zealand.

Fellow South African-turned-Australian Clyde Rathbone has paid tribute to Vickerman. Both players’ careers followed a similar path, and Rathbone has credited Vickerman with convincing him to move to Australia.

“Vicks is gone now and there will be no more calls to pick that massive brain in that massive head,” Rathbone said in his ROAR column. “What remains is a vast and inextinguishable collage of memories. Memories of a great man gone too soon.

“Daniel Vickerman had a rich life. He experienced incredible triumphs, painful defeats, all in-between. He sought adventure, embraced challenges, and maintained a rare blend of integrity and humility throughout. He loved, and was loved by a great many people.

“He will not be forgotten. Here’s to you Vicks.”

While speculation about the cause of death has been rife, the official word is that – for the time being at least – respect is being paid to family and loved ones and there will be no further details released.

The following video explains things a bit better though, with former teammate Owen Finegan saying that Vickerman had opened up to him about certain issues in the past.

Finegan also said in his ABC column that those close to Vickerman will help his family.

“I’m sure the whole rugby community will come around them. I’ve only heard for about — well it hasn’t even been 24 hours and you think to yourself could you have done anything to help him,” he said.

“He’s got a young family and they’ll need all the support they can get. [It will] definitely be something that everyone will be offering and be very supportive to Sarah and the kids and their needs.”

Sincere condolences to his family, friends and all those he touched in his 37 years. RIP.