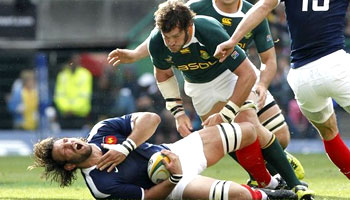 While Bakkies Botha served out a suspension for foul play, eagerly waiting in the wings has been his Bulls teammate Danie Rossouw, who off late has once again shown exactly how much of a valuable asset he is to Springbok rugby.

The big lock-come-loose forward has been on a great run of form of late with both the Bulls in their Super 14 winning campaign, and then more recently with the Springboks against both Wales and France .

Rossouw, who made that famous try saving tackle on Mark Cueto in the 2007 World Cup final , has an incredible work rate for such a big guy and while adept at playing in both the second and back row, enjoys mixing it up physically and is great with ball in hand.

His form is making fans and coaching staff appreciate that while the Botha-Matfied combination has been arguably the best in world rugby in recent times, the Matfield-Rossouw combo can be just as menacing, and at times can offer more.

“Danie is in the form of his life right now,” said captain John Smit after Welsh Test “For how many years have we thought the choice for the No.4 jersey was a fait accompli, but I dont think that is the case anymore.”

Against the French he was menacing on defense, no more so than with this big tackle on Lionel Nallet, who took some time to get up. Questions were asked about the legitimacy of the hit, but referee Bryce Lawrence actually overruled his assistant, who said it was a shoulder charge.

South Africa play the touring Italian tomorrow in Witbank, a match that Rossouw has actually been rested for, with the return of Bakkies Botha. Check out the fixtures page to see what else is happening around the world of rugby.