Daniel du Plessis awkwardly sent to the sinbin whilst knocked out 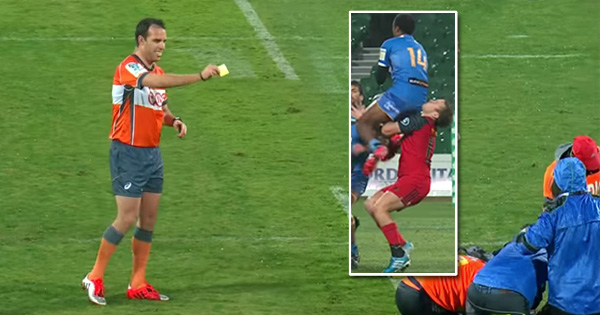 Du Plessis took out former Stormers player Marcel Brache in the air as the Western Force winger went up for a high ball, but unfortunately for the centre he copped a facefull of Brache’s hip, similar to the CJ Stander incident last month.

Referee Fraser then showed Du Plessis the yellow with the player still on the floor, saying “It’s a little unfortunate that he’s obviously going off, but the facts are he’s taken the man in the air. He’s not a realistic catcher… landed dangerously, so it’s a yellow card.”.

You can actually see the grimace on Fraser’s face when he gets the card out.

Du Plessis was stretchered off and didn’t return to the field. The Stormers went on to finish 22-3 in front however, picking up a bonus point win and setting up a playoff place.

View highlights from this match plus all of round 16

Discussion about the inconsistencies around taking the man out in the air:

Australian youngster reveals why he rejected Japan for shot at Wallabies

Fresh from confirming his future with Australian rugby, lock Nick Frost has explained why he turned his back on a big-money Japan deal to re-sign with the Brumbies.