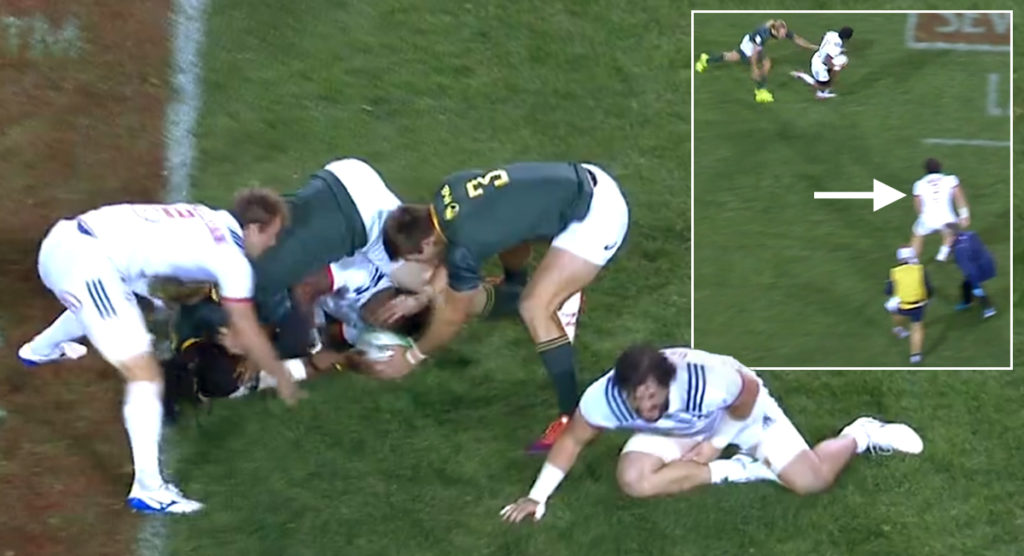 The USA defended their Las Vegas 7s title last weekend and the scary thing for those challenging them is that they did it for the most part without key players Perry Baker and Danny Barrett. The latter was injured in the quarter final, but showed his typically stoic approach by continuing to play.

As the USA led South Africa 12-0 in the quarter final, Blitzboks playmaker Branco du Preez attempted to create something out wide but was very quickly shutdown in a big double tackle by Carlin Isles and Barrett.

Barrett flew into him with such force that he broke his arm in contact and then landed awkwardly on it. But that was not quite the end of his day. With the warrior mentality we’ve seen from him on many occassions before, he got up and leapt at the next runner, attempting to tackle him with just one arm.

Medics came on the field and it looked like that was him for the day, but as Isles got the ball and a counter attack ensued, Barrett came back from the dead to join in support and actually made what could have been a very important clearout at the ruck when Isles was tackled. All of this led to a try.

“How about this from Danny Barrett – Puts in the shot, almost dislocates his left shoulder, and then gets back up and such is the character of this human, he makes the next hit with ONE arm,” said Rob Vickerman in commentary. “Danny Barrett is superhuman on the 7s field and the team are responding to his efforts.”

The USA won the quarter final and went on to easily beat Samoa in the final, going back to back in Vegas.

After the tournament Barrett said: “Amazing weekend with some of my favorite people! Tough to go out injured but the boys did well to bring it home. Time to heal up and get ready for what comes next, rehab!”

WATCH: Injured but not defeated, Cambridge lock surprises everyone

You can see it all from another angle here: