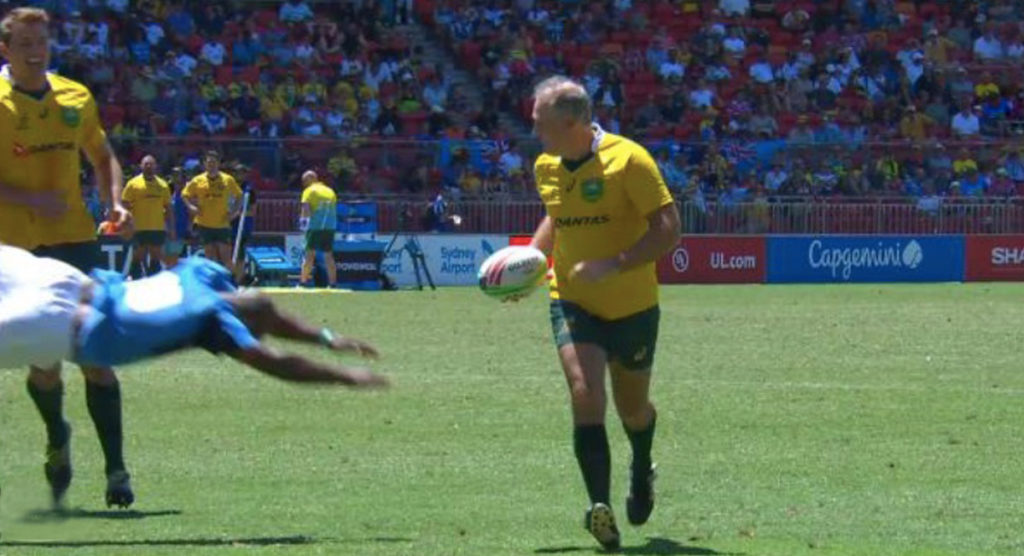 It’s been an eventful week for Australian rugby after backs coach and Wallabies legend Stephen Larkham was sacked just months out from the Rugby World Cup. David Campese has put up his hand for the role, and on the weekend showed everyone some trademark skills.

Larkham was let go by Michael Cheika and is reportedly transitioning into another role in the Rugby Australia set up. He didn’t mince his words when speaking about his relationship with Cheika.

“Ultimately Michael is responsible for the performance of the team,” Larkham said. “We have differences in attacking strategy and overall game philosophy.

“We couldn’t agree on these key points and it is in the best interest of the team that they receive clear and consistent messages from their coaches.

“I am obviously disappointed with this outcome as I had chosen to pursue the experience of taking the Wallabies through to the World Cup, however, I am pleased to be able to continue coaching and contributing to Australian Rugby in this new role.”

With a position needing to be filled before RWC in Japan, Campese has thrown his name into the hat.

“I’ve done various coaching jobs around the world, obviously not the extent to the Wallabies or the international jobs, but I’ve got a lot of experience and I’m there to get the best out of the players, help them understand what Australian rugby is about. It’s about unpredictability, basic skills and flair, and teamwork and winning to get that culture back.

One of the most talented players to ever play the game, and still holding the national try-scoring record, 1991 World Cup winning Campo turned out for a Classic Wallabies team at the Sydney 7s this past weekend.

They played against a formidable looking Pacific Rugby Players team that featured the likes of legends Radike Samo and Seilala Mapusua. And as you can see, plenty of fun was had and Campese showed that he’s still got some of those old moves.

Watch Justin Harrison and others speak about the day, along with more footage from the fun match.

🎥 #Sydney7s: Some early nerves from the boys, @radikesamo swaps teams and grabs the first try & @Davidcampese11 turns back the clock for a great day at the @Aussie7s
Video courtesy of @rugbycomau pic.twitter.com/7aVJludmf3