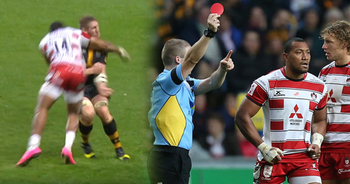 Gloucester’s David Halaifonua received a straight red card for this high and dangerous tackle during their 23-3 loss to Wasps in the Aviva Premiership at the weekend. It wasn’t the only red card of the match, as a Wasps prop was sent off for punching near the end.

Tongan winger Halaifonua flew in to make the hit as Wasps spread the ball wide, and Wales lock Bradley Davies showed some quick hands to release the pass.

Halaifonua, who played for his country at the Rugby World Cup, committed himself to the big shot but ended up making it slightly late but more significantly, too high.

He was actually featured here on Rugbydump in June last year too, after making another brutal hit against Samoa in the Pacific Nations Cup. You can view that big hit here.

Davies needed medical attention and after a rather confusing exchange between referee and Television Match Official – the referee was happy with yellow until an extra description was given – Halaifonua was sent off.

Second rower Davies walked off the field but later returned after receiving a medical assesment.

Wasps already led 16-0 at the time so going a player down didn’t help Gloucester’s cause.

Wasps did lose a man themselves later in the match, as Lorenzo Cittadini was also red carded, for punching in a ruck in the 74th minute. It didn’t have any bearing on the result though, as Wasps won comfortably to climb above Gloucester on the Premiership table.

View match highlights, which include an excellent Christian Wade try and the other red card.

Do you think a red card was harsh, or did the ref make the correct call?

UPDATE: Halaifonua has been banned for two weeks for the tackle