David Knox does a Hollywood, sending off Os Du Randt in 1997 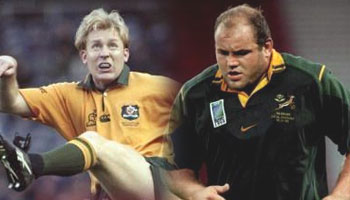 We’ve all seen what soccer players are like when they get the slightest of nudges, or take a decent tackle – they hold their heads, roll around on the floor, and basically act as if they’ve either broken a leg or a family member has just died.

Commonly known as a ‘Hollywood’, acting to get a penalty or more is a common way to trick the ref into thinking the incident was worse than it actually is.

In the 1997 game between the Boks and the Wallabies, flyhalf David Knox took a bit of a late hit from Os Du Randt which in normal circumstances should have just been a penalty, if that. Through his acting, Knox managed to milk a penalty and a crazy yellow card for big Os.

Thankfully I’ve only seen this type of acting on the rugby field once or twice. Soccer can keep it as far I’m concerned.