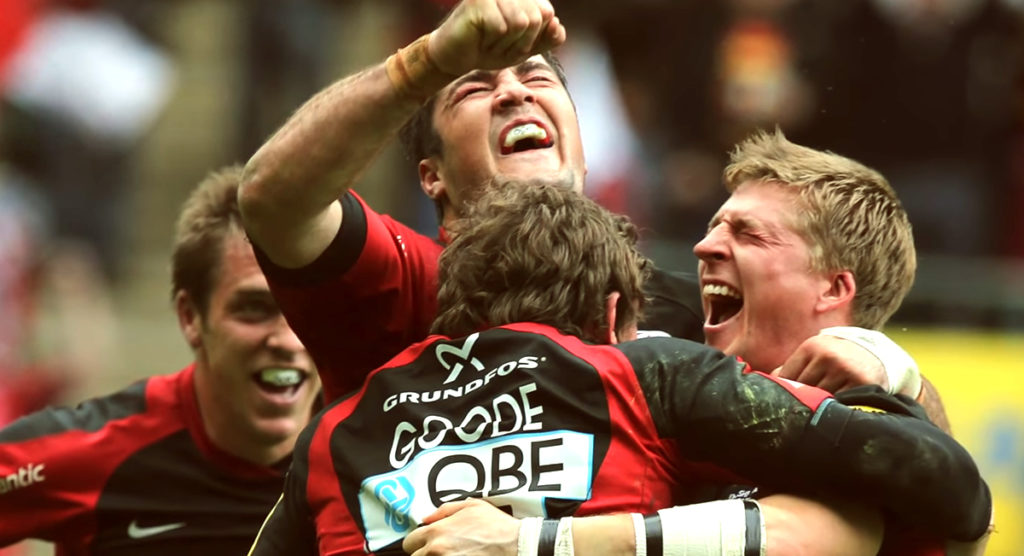 Saracens and former England winger David Strettle has released a sincere open letter after the announcement of his retirement from rugby yesterday. Saracens have followed up with two video tributes to the man who will end a 17-year career.

The 35-year-old will bow out at the end of the season, bringing a glittering career to an end, which has seen him win domestic titles in England and France, with Saracens and Clermont Auvergne respectively.

The winger said that social media posts from retiring players are one of the “certainties of life”, before thanking the various people that have helped him throughout his career. But the former Harlequin admitted that his rugby career cannot last forever, and this is the time to end his career.

Strettle earned 14 England caps between 2007 and 2013, and was part of the squad that won the 2011 Six Nations title. He also represented England on the sevens circuit before he had established himself in the 15 man format.

He was touted as one of England’s most promising players at one stage, and while his international career may not have developed in the way that many would have expected, he has thrived in the domestic game.

He has been one of the most revered and complete players in the Premiership during his time with both Harlequins and Saracens, and after rejoining Sarries at the beginning of the season, he could add to his horde of silverware with a potential Champions Cup and Premiership double before he retires.

You can read what Strettle had to say in his post below:

Death, taxes….and rugby players’ retirement statements on social media…all certainties of life in this day an age. So, this is it for me. Every journey has its end and every curtain has its call, and I’m now having to admit that I can’t play rugby forever. There’s always that nagging doubt in the back of your mind as a rugby player, that nudges you to say, ‘go on…one more year!’ Sometimes you listen to it, but sometimes you take a step back and realise that now is time. Yet, I won’t gloss over the fact I am leaving a sport and a way of life, that has given me so much opportunity, and in turn, has provided me a wealth of memories, friendships, and life lessons since I first laced up my boots as a snotty-nosed kid in Warrington. From finding so much enjoyment in playing the game at my local club Lymm RFC, to learning the ropes at Rotherham Titans – then being lucky enough to play at three of the elite clubs our game can boast in Harlequins, ASM Clermont Auvergne and Saracens. To play for my country is something that I will look back on with immense pride, on both the Sevens circuit and then for the England national side. I’d like to thank Saracens, who provided me and my family with the opportunity to return to Allianz Park for one more season. I feel incredibly lucky to come back to this Club, and a massive thank you must go to Nigel Wray and Mark McCall, all the coaching and backroom staff, past and present for their support and encouragement, and my teammates, for sharing so many experiences and memories with along the way. My final thanks go to my family. To my Mum and Dad, for doing what every good parent does by believing in me and providing me with the support and dedication to make the world my oyster. Latterly in my life, to my wife, Phoebe, and my two little munchkins, Isla and Leo, for giving me the perfect reason to play rugby, to make them proud. So…from me, thank you. Thanks for all your support, thanks for all the memories, and here’s to making one or two more before I become another one of those grumpy old timers who charge modest sums to speak at your local rugby club to trot out the tired old clichés! Ta, Strets!