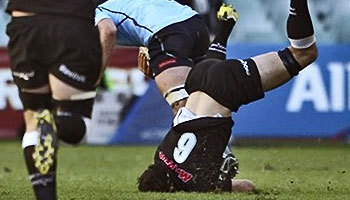 The Waratahs came from behind to beat the Sharks 34-30 in Sydney on Saturday in one of many close finishes in Super Rugby this weekend. One of the more memorable moments of the game was this huge fend from Dean Mumm late in the second half.

Last weekend promising Sharks flanker Marcel Coetzee was on the other side of a Digby Ioane tip tackle in Durban, the result of which was actually a five week suspension for the Wallaby winger. This time Coetzee was unfortunate enough to be on the receiving end yet again.

With only about seven minutes left in the game and trailing 30-27, lock Dean Mumm’s big charge proved the difference between the sides as he set off down field, given the home side the impetus needed to create a late winning try for winger Tom Kingston.

“If you look at all the other games in the Super Rugby, it’s been won in the last 10 minutes. We knew that and the Tahs snatched it at the death,” said Sharks prop Jannie Du Plessis.

“We tried our best, it was a great rugby game, unfortunately we couldn’t pull it off.”

Mumm’s fend on Coetzee will go down as a thing of legend, purely for the spectacular nature of it, and of course the fact that it led up to the winning try. Coetzee went way to high on a tall man, but the acceleration and balance of the big second rower was probably the most impressive factor.