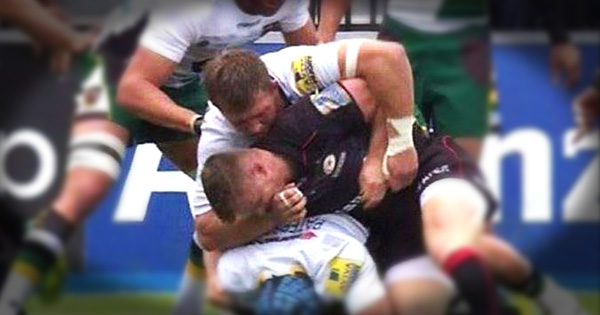 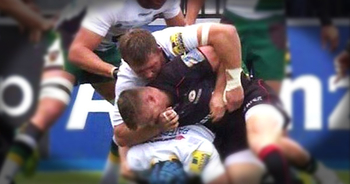 Chris Ashton has been banned for no less than 13 weeks following two biting incidents that took place in the Aviva Premiership this past weekend. The Saracens winger appeared before a RFU disciplinary panel last night, charged with acts contrary to good sportsmanship.

The England winger was cited for allegedly biting Alex Waller of Northampton Saints on not one but two separate occasions, the first happening in the 24th minute and the second a minute later.

Ashton contested both counts but only the second was dismissed, as the independant panel proved that he did indeed commit the first instance of biting.

“Having considered detailed evidence the panel concluded that during the course of a ruck Chris Ashton bit the arm of Alex Waller at a time that Mr Waller was attempting to clear him out,” said Chairman of the panel, Philip Evans QC.

“The panel concluded it was a low-end entry point aggravated by his previous record.”

So while the offence itself in isolation would not have been equal to a 13-week ban, his disciplinary record had a huge bearing on the overall outcome.

Earlier this year Ashton was making his move towards Eddie Jones’ England squad for the Six Nations, only to be banned for raking his fingers across the eyes of Ulster’s Luke Marshall.

While the incident was viewed by many as fairly innocuous and the punishment severe, there will be less sympathy for this one, which looked fairly clear cut.

Alex Waller himself appeared a bit frustrated later in the match, as he got himself yellow carded and perhaps was lucky that the referee’s took their time looking at this one. The word ‘headbutt’ got thrown around a bit, but he was only sinbinned for the dump off the ball.

As for Ashton, England great Will Greenwood reacted to the biting news allegations, comparing him to controversial Italian footballer Mario Balotelli.