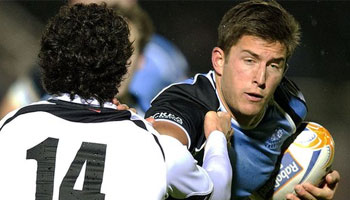 Glasgow Warriors beat Italian side Zebre 22-19 in Friday night’s RaboDirect PRO12 game, but suffered another two injuries as both DTH van der Merwe and Moray Low limped off. Van der Merwe did it in style though, setting up a try in the process.

Zebre came close to picking up their first PRO12 win but Canada wing Van der Merwe had a big impact on the game, scoring an acrobatic try in the corner before setting up Graeme Morrison with an great bit of play down the wing.

He beat a would-be tackler, pulled his hamstring, but kept going and drew in a few players before offloading the decisive no-look pass to Morrison, who was up in support.

Scotland back Max Evans actually played a large part in you watching the clip right now, as he alerted RD about it via Twitter after watching the ‘must see bit of skill’ from his former teammate.

Van der Merwe, who is expected to be out of action for up to six weeks, kept his humour about it, replying that it was a great move and he ‘might try it again sometime’.

As with what Max did, if you’re watching a game and see something you think should be shared on Rugbydump, please don’t hesitate to drop us a quick tweet, or email.