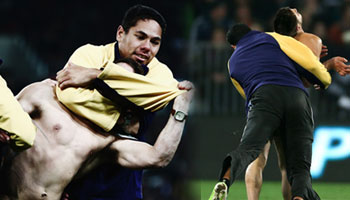 The streaker from the New Zealand vs England Test has been banned for two years from the Forsyth Barr Stadium, and will face a charge of offensive behaviour this week. He was also fined $1000. The guy that tackled him is a Canterbury squad player.

Videos of the brutal hit have gone viral, causing outage and mixed opinions amongst fans, some of whom say the tackle by the security guard was totally over the top and extremely dangerous.

Stadium management have said that he was acting as instructed, and the pitch invader will not be receiving any kind of apology for what he did on Saturday night.

“If streakers evade any security guard, [they must] bring them under control, so the course of action that he took was appropriate as per his brief, which would have been player safety and fast exit off the ground,” said Terry Davies, Dunedin Venues.

The man who made the big tackle is 19-year-old Brad Hempopo, an eighthman who has been named in Canterbury’s wider training squad for the ITM Cup. He is a student who was working as a security guard on the night to earn a bit of extra money.

Crusaders coach Todd Blackadder said that he doubts he was trying to cause harm, and that it’s a lesson for fans. “Its a good reminder to all those idiots out there not to get out on the field.”

The 28-year-old streaker, builder Adam Holtslag, has said that he won’t be attempting that again. “I was expecting to get hit but I didn’t really see that one coming. It’ll be the first and last time.”

In the footage, above and below, you can see his neck snapping back violently. He was also put in a headlock before being dragged off by three security guards. Holtslag said that his neck was feeling ‘surprisingly good’ but his ribs hurt, and he almost passed out from the headlock.

He said his girlfriend wasn’t too happy, and he has been nursing a hangover ever since.

In Friday’s Top 5 Fan Gone Wild Moments Ever we saw a clip of a fan being smashed at the USA Sevens, and some of you may remember that a few years back a similar thing happened in New Zealand, whereby a not so naked fan was prancing about on the field before an overzealous security guard tackled him hard.

It’s all fun and games for those watching, but once you enter the field of play you’re a target and viewed as a potential threat to the players, so should be prepared to be dealt with as such.