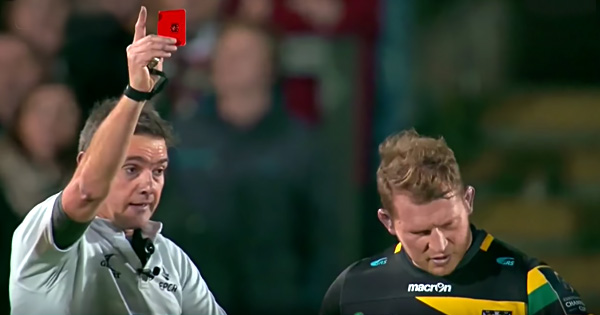 Dylan Hartley faces yet another disciplinary sanction following his latest red card, for knocking out Leinster’s Sean O’Brien with a swinging arm. Hartley could see himself banned for a large portion of the Six Nations, and might put his Lions tour in jeopardy.

Hartley came on during Friday night’s home defeat by Leinster, and within six minutes he managed to get himself sent straight back off, for a nasty looking challenge that could best be described as reckless, but would probably be more suited to being called a cheapshot.

“He can have very very few complaints about it,” said Brian O’Driscoll in commentary. “That’s very reckless.. It’s absolutely stupid. I don’t know what positive impact you’re going to have by swinging recklessly like that.”

He also later tweeted that any discussions about O’Brien ducking into it, or Hartley mistiming the challenge, are most probably inaccurate.

Anyone actually questioning the Hartley red card look at his reaction to it. Not a murmur of complaint from him. He knew what was coming.

England coach Eddie Jones was on hand to witness it, and you could see him cringing in his chair as the red card was shown, no doubt wondering how it is going to impact his Six Nations campaign in a few month’s time.

Despite leading England to a fantastic unbeaten 2016, Hartley could see himself missing out on another British & Irish Lions tour, as discipline will be key for Warren Gatland’s squad in New Zealand.

Coupled with him potentially missing a lot of the Six Nations, things are not looking good for him, and certainly not in the leadership role that some people had touted him for.

O’Brien left the field for a head injury assesment and did not return.

Hartley faces a disciplinary hearing this week and with his horrendous record – which includes offences such as head butting, gouging, biting, punching and abusing a referee – he can expect a lenghty ban.

World Rugby’s latest directives have also clearly stated that the head area is sacrosanct, so he is probably looking at being out of action for eight weeks at the very least.