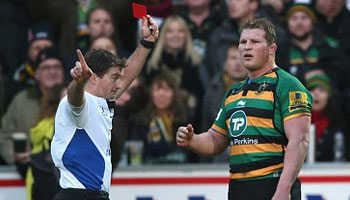 Dylan Hartley will find out on Tuesday if his England career is in doubt following a straight red card he received in Northampton Saints’ 23-19 win over Leicester Tigers this past weekend. Hartley struck Matt Smith with his elbow for his second red card in 18 months.

Hartley elbowed Smith in the face in Saturday’s Aviva Premiership clash, which will lead to a Rugby Football Union (RFU) disciplinary hearing early this week. The outcome of which could mean that Hartley may be out of the Six Nations with a hefty ban.

Missing the Championship would make it tough for him to force his way back into the squad for the Rugby World Cup, hosted in England.

“If you strike someone in the face you are liable to get yourself in trouble,” said Richard Cockerill, Leicester Tigers Director of Rugby.

Television Match Official Sean Davey convinced referee JP Doyle to reconsider, after he had initially ruled that a yellow card was sufficient punishment.

It’s not the first time that Hartley has found himself fall foul of the law. He has a fairly lengthy rap sheet, one that includes eye gouging in 2007, and more recently, a ban for swearing at referee Wayne Barnes in the 2013 Aviva Premiership Final.

While those have nothing to do with this incident, they will play against him come disciplinary hearing time, where past misdemeanors always play a role in determining the severity of the ban.

Northampton achieved a famous victory without Hartley, holding on despite being down to 14 men for a large majority of the match.

“Defensively, we were poor. We were too narrow, and it will be interesting when we have a look on Monday morning that one side with one less back can create opportunities in the wide channels against us. That’s not right,” Cockerill said.

UPDATE: Hartley has been suspended for three weeks.

The Northampton Saints hooker pleaded guilty and the case was heard via conference call by Jeremy Summers, sitting as a sole Judicial Officer.

Summers said: “The sanction reflects the low end entry point of the offence, which carries a two-week tariff. The entry point was aggravated having regard to Dylan’s previous record and a week was taken off to reflect mitigating circumstances.

“As such the sanction reflects the player’s record rather than the seriousness of the offence itself.”