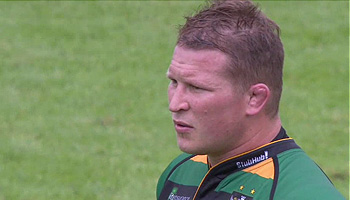 Dylan Hartley will appear before a RFU Disciplinary panel later today, charged with striking an opponent with the head in the Aviva Premiership semi final between Northampton Saints and Saracens. If found guilty, Hartley could jeopardise his position with England.

Defending champions Saints lost 29-24, but the incident took place as flanker Tom Wood drove over to score. As you can see, Hartley was celebrating, then turned around and walked straight into opposition hooker, Jamie George, making contact with his head.

A scuffle ensued and ref Greg Garner asked the TMO to bring it up on the big screen, but he was satisfied that there was nothing in it, so play continued. Hartley was later cited.

Hartley has been suspended five times for various offences ranging from biting to gouging, to insulting a referee. All of that will play against him if found guilty at the hearing.

The hearing will be held at the Coventry Holiday Inn on Wednesday 27th May at 7.15pm.

View highlights from the match

UPDATE: Dylan Hartley has been suspended for four weeks.