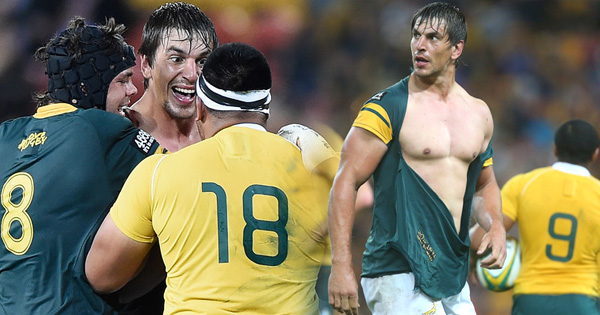 In a fairly amusing moment during the clash between the Wallabies and Springboks in Brisbane this past weekend, fiery lock Eben Etzebeth had his jersey ripped apart after a scuffle with Wallabies Quade Cooper and Allan Alaatatoa.

It appeared the jersey was already slightly ripped when Cooper – perhaps seeing it as the ‘easiest’ way to restrain Etzebeth – seemingly decided to finish the job.

At 6ft 8in and 18st, Etzebeth has certainly already cemented his legacy as the next Springbok enforcer. South Africa seeminly has a way of mass-producing menacing fowards and Etzebeth is but the latest in a long line of giants to play for South Africa.

In this match the 24-year-old actually reached the milestone of becoming the youngest player to ever reach 50 Springbok Test caps. It was also his 27th consecutive Test.

He’s usually more than willing to mix it up at any time with opposing players and when donning the jersey of his provincial or regional team, Springbok teammates alike.

Already a cult-figure for his size and strength, moments like these only serve to grow the legend of the giant Springbok. After all, not just anyone can claim 65kg dumbbells to be “unsatisfactory”.