Eddie Jones reflects on that time he lambasted Japanese rugby 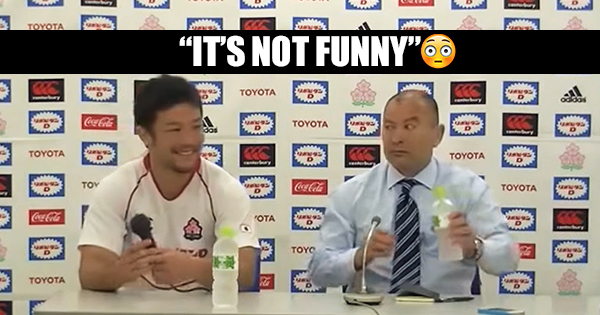 England coach Eddie Jones has been in the news this week after having re-signed with England Rugby until 2021. A few years back he hit the headlines for another reason though, after he ripped into the Japanese captain in a press conference. Here, he reflects on that.

Jones, who famously coached Japan to a Springbok-beating upset at the 2015 Rugby World Cup, demanded high standards from his Japanese side, and following a disappointing 2012 loss to the French Barbarians, he let rip.

In the interview below, Jones reflects on the rant, saying that it was the best thing that could have happened to Japanese rugby, as it helped to change their mindset.

The Australian has of course since moved on to coach England, and has an impressive 95% win record, losing just one match (to Ireland) out of 23 since taking over.

This week, he signed a two year contract extension, meaning that he will be in charge until after the next world cup, leaving in 2021.

“Coaching England is a dream job for me, and I was delighted to be asked to stay on after the World Cup,” he said. “I have been completely focused on developing a team capable of being the number one rugby team in the world and winning the World Cup in 2019.”

The 2019 World Cup takes place in Japan, which brings us back to this infamous 2012 rant, which you can watch in the press conference footage below.

If you’ve never seen it, it gets really serious around 2:50 in, when the Japanese skipper smiles.