Edwin Cocker hit from the London Sevens - NZ vs Argentina 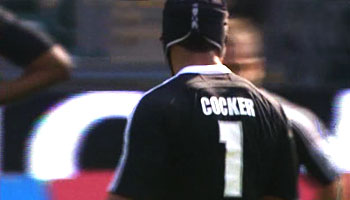 The London leg of the IRB Sevens World Series kicked off today at Twickenham with a game that could have so easily gone wrong for champions New Zealand.

Argentina, despite conceding an early try, pushed them all the way and were leading 7-5 until a last minute try from the All Blacks stole the victory and broke the hearts of the men in blue.

Despite being close, the game itself wasn’t great, so we’ve picked out this big hit from New Zealand player Edwin Cocker.

It looks to be a vicious shoulder but the referee doesn’t see it that way and allows it. He did wrap his one arm around as much as possible, while off balance, so maybe the intent wasn’t there.

Opinions will be varied though, as the commentator for one seemed to think it was ‘a shoulder into the face’. Feel free to leave your thoughts on it as a comment below.