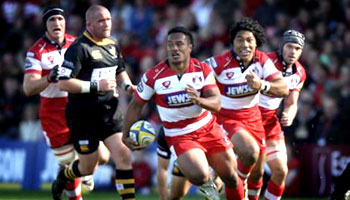 A tense Aviva Premiership game took place between Gloucester and Wasps at Kingsholm on the weekend, with the home side taking it 22-20 after two big Nicky Robinson penalties. Featured here is the try of the match from Eliota Fuimaono-Sapolu, and the fight between forwards Tim Payne and Brett Deacon.

You can view the rest of the highlights from the game on the e-player on the sidebar, as well as highlights of all the other Premiership matches. These two incidents in particular were requested as many of you wanted to see them again.

The try to Fuimaono-Sapolu was a bit of a strange one as he managed to brush off four would-be tacklers before gassing it to the line. It was a mix of lackluster defending and determined, powerful running. The hand-offs were pretty decent too. Overall, it was a great try from a young guy who looked impressive all afternoon.

The second clip shown here is off the skirmish that broke out between Tim Payne and Brett Deacon, after it looked as though Payne had stamped on a player on the ground, only for Deacon to stamp on him in what looked like a schoolyard disagreement.

It soon got serious as punches were thrown, but it ended as quickly as it started, with both players calming down for referee Andrew Small to send them to the sideline for ten minutes.

Gloucester replacement flyhalf Nicky Robinson landed two great penalty kicks from the same spot late in the second half to take them into the lead, while Wasps flyhalf Dave Walder came up short with a long kick of his own that landed inches below the crossbar. That meant Gloucester took it at the death, picking up their second win of the season.

Also, these two clips are posted as a playlist, so you can either watch them one after the other, or skip around as you please.