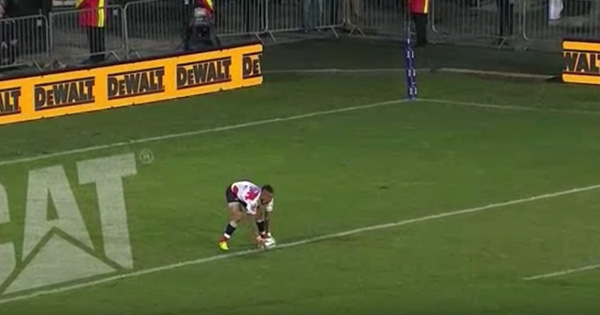 On Saturday we saw a similar story to last year, only a different location. Unfortunately for Elton Jantjies and the Lions, they’ve now lost their third consecutive Super Rugby final, and didn’t ever look close to changing that.

While Crusaders’ play-maker Richie Mo’unga looked like a bonafide superstar and claimed Man of the Match honours, Jantjies will be struggling to put the match far into the rear view.

With about 29 minutes gone, Jantjies kicked the ball aimlessly before Mo’unga launched a well-placed kick behind the Lions, all the way down to the Crusaders try line.

With the ball dying just shy of breaking the plane, Jantjies was deemed to have broken the plane himself after lifting and placing the ball in the in-goal area.

Referee Angus Garder was quick to the spot and knew the interpretation exactly, stating: “He’s taken the ball across the line, so that’s a scrum.”

Crusaders were then awarded the five metre scrum.

Undoubtedly, Jantjies has been a fine player for the Lions with several highlights to his name, but moments like this have surely become all too commonplace and equally frustrating for fans as well.

Quote of the year

The first part of this quote from him earlier in the week makes for amusing reading: “We’re definitely going to make mistakes, but that’s what this team stands for.

“When we make them, we fix them. The past few weeks we’ve made them in the first 10 minutes and many people feel that it’s a poor start but we don’t see it that way. There are still 70 minutes left.”

This strategy can only get you into trouble with an opponent the calibre of the Crusaders. And while it’s certainly a noble thought, maybe striving to eliminate mistakes altogether is the championship formula.

Crusaders were just too clinical and made every mistake count.

Sadly for Jantjies, there would be one more moment of disappointment as he later came within what appeared to be one inch from scoring a try under the posts. The TMO had a look and said he came up just short.

The Crusaders went on to win their ninth title and second in a row by the score of 37-18.