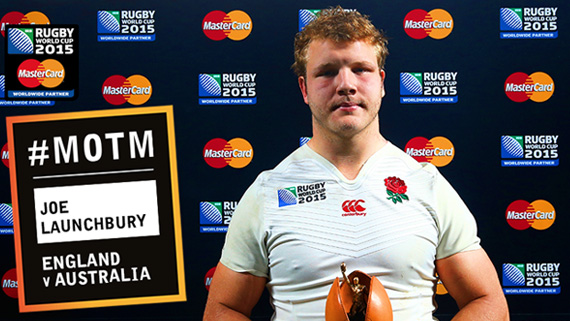 England lock Joe Launchbury, who was bizarrely named Man of the Match after their loss to Australia, has admitted that he was as surprised as anyone to receive the award. It’s not the first time during this World Cup that the award has gone to the wrong person, as organisers have adopted a strange system that selects nominees long before full time.

In the case of England vs Australia, both David Pocock and Bernard Foley had great games. Either one could have been named as the Mastercard Man of the Match, but Foley ultimately made all the difference, scoring a whopping 28 of Australia’s points and finishing two excellently taken tries.

Launchbury however was given the award, and as you can see from the awkward image above, he was visibly embarassed by it.

“It was extremely strange to be named man of the match. It was embarrassing and it definitely won’t go on the mantelpiece at home,” Launchbury said this week. “It was a strange award that could have gone to a whole host of guys on their team.”

This year the organisers of the tournament decided that the award would be selected via a process that sees a shortlist of three nominated by the official world radio feed, before fans can vote for their preferred choice on Twitter. 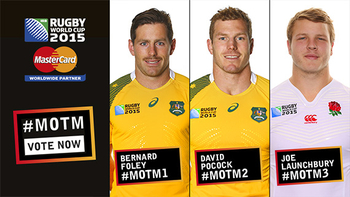 The fault in that is that it takes place roughly 18 minutes before the match has even finished.

As we all know, a lot can happen during that time. Another fault is that it becomes a popularity contest, and in this case, perhaps due to the timezone or sheer weight of numbers, the English player received the most votes.

We saw in New Zealand’s game with Georgia that despite the latter losing, popular no-nonsense forward Mamuka Gorgodze received the award, while in South Africa’s match against the USA this week, Bryan Habana scored a hat-trick (and nearly more) to equal Jonah Lomu’s try scoring record in World Cups, but wasn’t even nominated.

While a lot of it is indeed subjective, to choose the nominees so early isn’t a fair reflection of the actual performanes. Launchbury was excellent, but as the 24-year-old himself said, there were other players who were far more deserving of the award.

As for the look on his face, priceless.

What do you think of the current system?